Checking the health and safety of satellites 36,000 kilometres above the Earth is currently impossible. The founders of High Earth Orbit Robotics hope to change that.

Space, despite its name, is more crowded than you might think. When satellites and debris meet, the results of this ‘rapid unscheduled disassembly’ can cost tens of millions of dollars a year.

The company grew out of PhD work by Founder and CEO William Crowe, a doctoral candidate who has investigated the possibility of leaving craft in high Earth orbit to be deployed when asteroids come within range.

“The idea that I had was not to even leave Earth orbit, just remain in Earth orbit with a CubeSat or a nanosatellite and just wait for these asteroids,” he told create.

“You get the same quality as a space mission that went out for years and years and did what we’d call a fly-by mission.”

Crowe’s PhD examines the perturbation on spacecraft swarms from passing asteroids and uses this to characterise the asteroids. A craft will change trajectory slightly on approach, and, from this, an asteroid’s mass can be calculated.

“Finding out how big an asteroid is in terms of mass is an epic problem in astrodynamics, and one that isn’t done to a great degree of accuracy today,” he explains. “We don’t know what the majority of asteroids weigh. We know what maybe two hundred weigh where there is more accuracy — that’s within 10 per cent. Everything else: no idea.”

This led to HEO’s planned mission to have nanosatellites prospect near-Earth asteroids.

Jayakody studied electronics engineering in Sri Lanka before moving to Australia and earning a PhD in mechatronics.

He and Crowe met in 2015 on the University of New South Wales (UNSW) team for the Global Space Balloon Challenge, co-founded by then-Stanford University student Lawrence Leung.

Jayakody had focused on control for unmanned aerial vehicles, and then image processing and machine learning, before the company officially began in 2016.

“There was not much controlling [on the balloon project] — mostly electronics and stuff — but then when Will came up with this idea of having a CubeSat in high Earth orbit chasing interesting near-Earth objects, and I was curious,” he recalls.

“You don’t get a chance every day to launch a satellite, so I jumped on the chance.”

Crowe had wanted to chase asteroids before then. The year the pair met up, he won the 2015 Space Generation Advisory Council’s ‘Move an Asteroid’ challenge for a paper on his approach to meeting near-Earth objects in a fly-by mission. This informed the first mission the company set its sights on.

Near-Earth asteroid mining is being pursued by several companies, including Planetary Resources, which was founded by engineer and entrepreneur Peter Diamandis, with others, in 2012.

According to its enthusiasts, asteroid mining will be essential if humans are to eventually become an interplanetary species, due to the economics of launching materials from Earth. It is estimated that every kilogram of mass launched requires 10 kilograms of fuel and structure to take it into space. Being able to extract resources after leaving Earth — rather than expensively drag them into space — is therefore essential.

Despite the commercial interest and the potentially huge wealth up for grabs, samples of asteroids have not been taken yet.

HEO’s proposed Salus mission would use nanosatellites in high Earth orbit to approach close by asteroids with an ion thruster, collect high-resolution images of them, and then transmit this information back to Earth

The business case, the company concedes, has been a struggle, especially with actual asteroid mining some way off. It has pivoted to consider another mission, named Argus, to track debris and assets above geosynchronous Earth orbit (GEO), in which there are hundreds of satellites.

HEO points out that five satellites in GEO were lost in 2016 and 2017; these were cumulatively worth $515 million. Imaging of objects at that altitude from Earth is poor at night and impossible during the day.

Besides collision avoidance, says Crowe, “Suddenly you’d be able to first understand if anyone was messing around with your satellite; there have been cases of satellites from nations that you might not be particularly friendly with sidling up to a satellite, specifically during the daytime.

“But we can also potentially get so close that we’d be able to start understanding the health of the satellites, to understand if an explosion was about to occur before it occurred, for example.”

The main sensor onboard HEO’s 6U form factor satellite is a telescope, and the focus is on capturing RGB images of assets, with potential for collecting hyperspectral imagery later on, which could be used for prospecting.

The basic source of power is lithium ion batteries, with the longitudinal faces of spacecraft holding solar panels. The main drain on power is the ion thruster for adjusting orbit. GEO is too high to use magnetorquers for stabilisation, so this is done through reaction wheels.

The height also means that GPS is not usable in its current form. HEO is collaborating with UNSW to use its weak GNSS positioning, and with other partnerships with communication providers to deal with the 37,000 kilometre communications link distance, says Jayakody.

Other partnerships, including with CSIRO’s data innovation group Data61, are in place to solve other challenges, but details are not yet able to be shared. Collaborating with companies and researchers outside the startup will be essential to reach their goal of a launch in the fourth quarter of 2019, says Crowe. 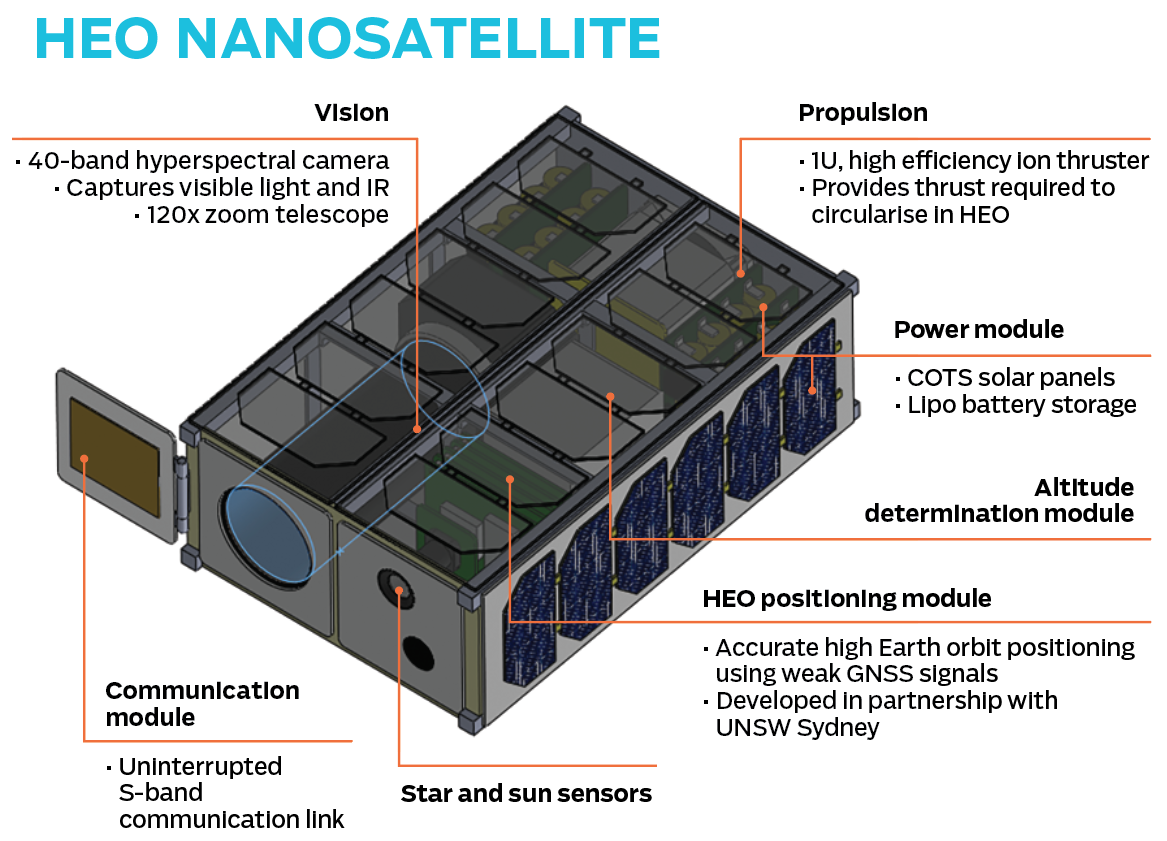 And though ‘Space 2.0’ has made launching CubeSats something that students and new businesses can consider, getting all the way to HEO presents a special challenge. Providers such as NanoRacks will only take a customer’s craft to low Earth orbit, well below where Crowe and Jayakody want to put satellites.

“It’s just that no one’s really engaged in this kind of launch before,” Crowe.

“There’s windows opening up here and there; launch and satellite manufacturers are looking into this possibility of having CubeSats in a higher Earth orbit,” adds Jayakody. “There are partnerships going on at the moment.”

This article was originally published as “Out of space” in the November 2018 edition of create.

Brent Balinski is a Sydney-based journalist who is interested in the many ways that engineering has improved everyday life. He enjoys jogging, gardening and playing the drums, and hopes to one day be a vaguely competent CAD operator.